The American crocodile is one of thirteen different kinds of crocodiles in the world. Crocodiles are typically brownish-green, have a long tail, narrow skull, a pointed snout, and a streamlined body. The tail is used like a paddle and is very powerful. A crocodile can swim up to 20 miles per hour. It can be distinguished from alligators since even when their mouth is closed, all its teeth are still visible. Their teeth normally last about two years and are all replaceable. Crocodiles can grow to be up to 20 feet long and can weigh up to 2,000 pounds. 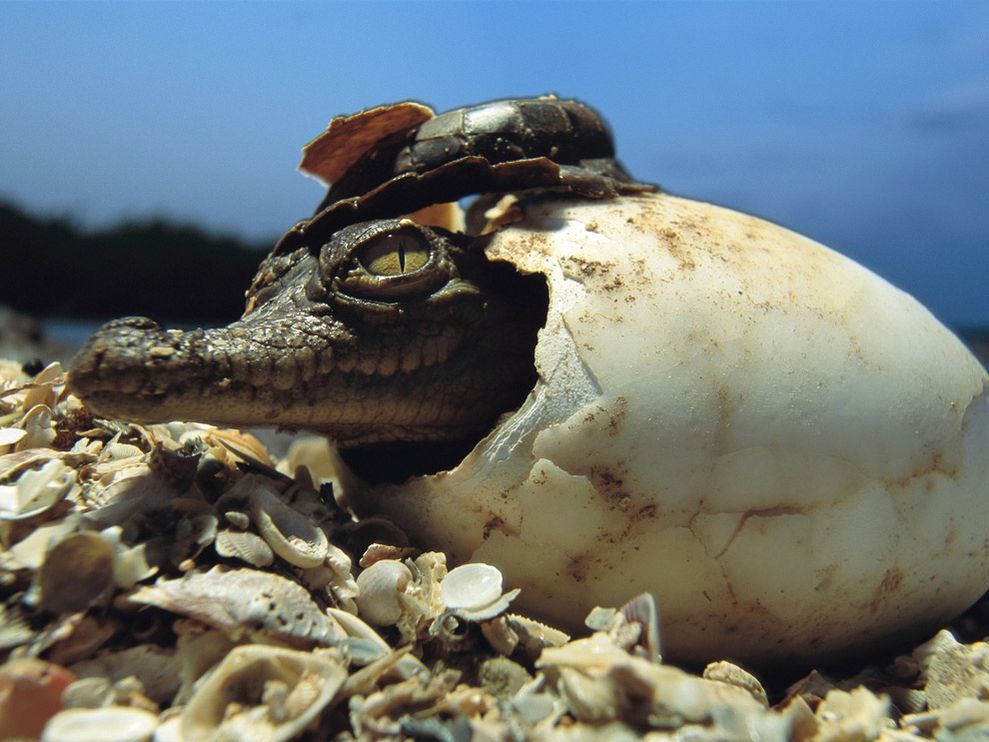 Crocodiles feed mainly fish, but are known to feast on just about anything that carelessly wanders close enough to become a meal. They swallow their prey whole, usually after drowning it. They have a tongue, but it doesn't help in their digestion. Crocodiles often swallow rocks that stay lodged inside their stomach and may help to grind up their food. According to some scientists,these rocks may also assist in keeping submerged in water. One curious trick the American crocodile uses to bait is prey is to vomit in small amounts in order to attract nearby fish. has an interesting way of attracting fish to them. Consequently, making them much easier to catch.

Crocodiles are cold-blooded and live only in warm climates. They excavate burrows along the water's edge. They live in salt water or in brackish water along the coastline or coastal river mouth. They surface from the water, in order to raise their body temperature by sun bathing.

During the dry season, they may are much more sluggish, often refuse to eat, and enjoy burrowing themselves in the mud. Crocodiles can live a very long time indeed, some crocodiles may live as long as 100 years, when environmental conditions are favorable. Crocodiles build nests in the winter months by digging a holes using their hind legs and can lay as many as 50 eggs at one time during mating season. The eggs take nine to ten weeks to hatch, the female almost remaining close to her nest. She will rest her head on the nest, listening for the calls of the hatchlings. She will then carefully dig them out using her front web-toed feet. In some cases the female may need to crack the eggshell in order to free the her small reptiles. The babies will feed on the yolk sac from their eggs typically for the first 2-14 days of life.

The babies make sounds like a barking dog and their teeth are razor sharp an pointed like tiny needles. When temperatures reach eighty-nine to ninety-one degrees in the nest, more males will catch, while lower temperatures (below 88 produces females. Any temperature below 82 will kill the babies). They can't survive in vary salty water either. The young crocodiles will soon feed on fish and small land animals. Crocodile waste provides an important nutrient for the smaller animals in the food chain,but the crocodile is at the top of the food chain itself.