A common hawk of wet deciduous woodlands, they are the noisiest of the buteos, especially during spring courtship. A perch-hunter of the forest understory, it feeds on frogs, snakes, lizards, and small mammals. Females are larger than males, sexes similar in appearance, juveniles differ from adults. Polytypic. Length 15–19" (38–48 cm); wingspan 37–42" (94–107 cm).

Identification A medium-size buteo with rounded wing tips that do not reach the tip of the tail. Adult: brown above with lighter feather edges and some streaking on head. Rufous on the upper-wing coverts gives the “red shoulders.” The primaries are barred or checkered black and white, the dark tail has 3 white bands. Underparts are rufous with white barring. Juvenile: mostly brown above, with less rufous on the shoulders than an adult. Undersides are buffy with variable dark streaks, the brown tail has multiple narrow bands. Flight: all ages show a distinct light crescent at the base of the primaries. Soars on flat wings held forward, glides with wings cupped, giving a “hunched” appearance. Wingbeats are quick and shallow, interspersed with quick glides. 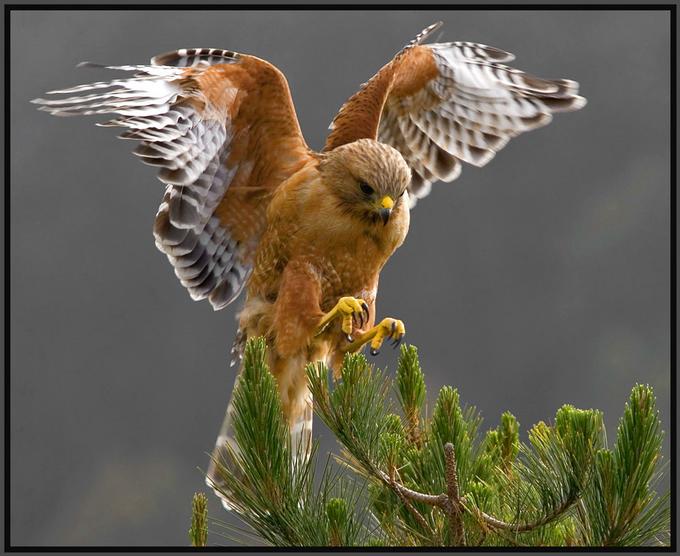 Geographic Variation Eastern (lineatus) as above, with adult showing dark streaks on breast. Juvenile tail from below is light with dark bands. Southeastern (alleni) and Texas (texanus) are very similar to each other, with adults showing no dark streaks on breast; texanus is slightly brighter rufous. Juveniles have darker underside of tail, heavier markings on underparts. South Florida (extimus) is the  palest subspecies. Adults are pale gray above, pale rufous underneath, with the head appearing light at a distance. Juveniles are less rufous, have thinner streaking underneath. California (elegans) is the brightest subspecies, with juveniles appearing more like adults. Adults have unbarred rufous on the breast, wider tail bands. Juveniles have similar upperwings to the adult, with the most rufous on the shoulders of any subspecies, and a white crescent on the primaries. Underparts are barred rufous and buffy. The dark tail shows whitish bands.
Take an everglades tour from Miami 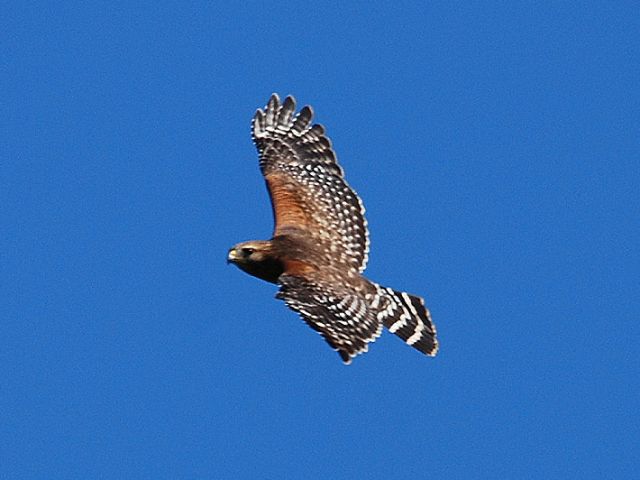 Similar Species Broad-winged hawk adult has rufous on breast, but no barring on primaries, only 1 or 2 tail bands, in flight shows more pointed wings. Juveniles are similar, but red-shouldered shows 3 bands on the folded secondaries; broad-winged lacks the pale crescent at the base of the primaries. Juvenile Northern Harrier is rufous underneath, but long tail, thin wings, and flight style are very different. Juvenile northern goshawk perched has heavy streaking underneath and a long tail, but dark-banded tail pattern and shorter wings will help the identification process.

Voice A loud, repeated kee-ahh, often in groups of 8–10 repetitions.

Status and Distribution A widespread breeder throughout East, into southern Canada. Found throughout the South, into eastern and southern Texas. California subspecies is coastal and in the Central Valley, up into Oregon and southern Washington. Breeding: nests in deciduous woodlands, usually river bottoms, near lakes or swamps. Coexists in similar habitat with the barred owl. Migration: northern birds migrate to southern states and into Mexico. Southern forms are nonmigratory. Vagrant: there are records of eastern birds west to Colorado, and California birds wander casually to Arizona, Idaho, and New Mexico.

Population Stable, as far as is known.

—From the National Geographic book Complete Birds of North America, 2006 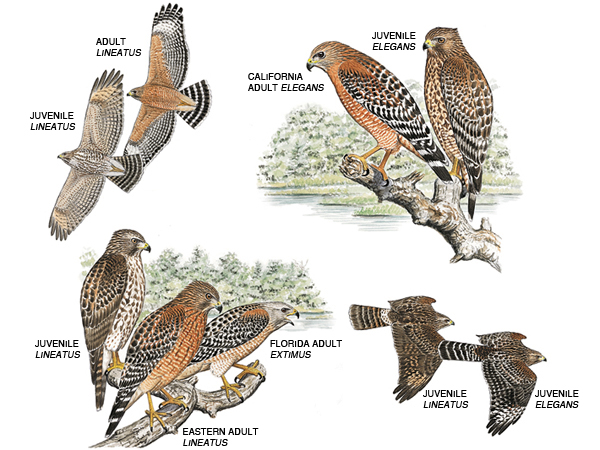